52% of Arizonans Support Legal Marijuana for Adult Use

PHOENIX (March 7, 2019) – A majority of Arizonans favor legalizing marijuana in Arizona,  according to a survey conducted by OH Predictive Insights (OHPI). The statewide poll of likely 2020 General Election voters supported legalization by a 52 to 41 margin.

While this is the first time an OHPI poll found a majority of voters support marijuana legalization, clear demographic and partisan splits remain among the electorate as it faces resistance from Republicans, women, and older voters.

“More than two years after voters narrowly rejected legalizing adult use marijuana, Arizonans have become more comfortable with the idea,” said Mike Noble, Chief of Research and Managing Partner of Phoenix-based research company OH Predictive Insights, “If supporters of adult use marijuana go back to the ballot in 2020, they face an open-minded electorate and better prospects for success than in 2016.”

Marijuana legalization support has risen drastically over time when previous survey work done by OHPI on the matter is taken into consideration. Polling conducted to test the support/opposition of a 2016 ballot measure found that only 42% of Arizonans would vote in favor of the measure. It would ultimately be rejected by voters 51 to 48 percent. The chart below shows the increase in support for marijuana since OHPI first looked at the ballot measure in June of 2016. 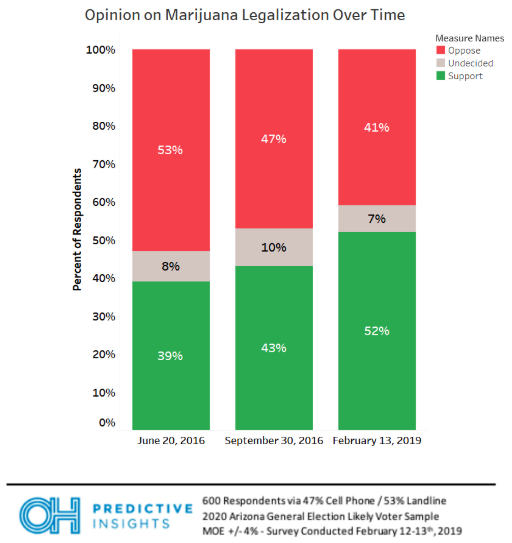 “There is still a persistent skepticism among older voters to legalize adult marijuana use,” said Noah Rudnick, a senior data analyst at OH Predictive Insights, “However, with Democrats more consolidated and Independent women more evenly split, the measure enjoys popularity.”

The chart below shows that the age difference persists across partisan lines with usually about 10% less support in each party if they’re aged 55 and up. 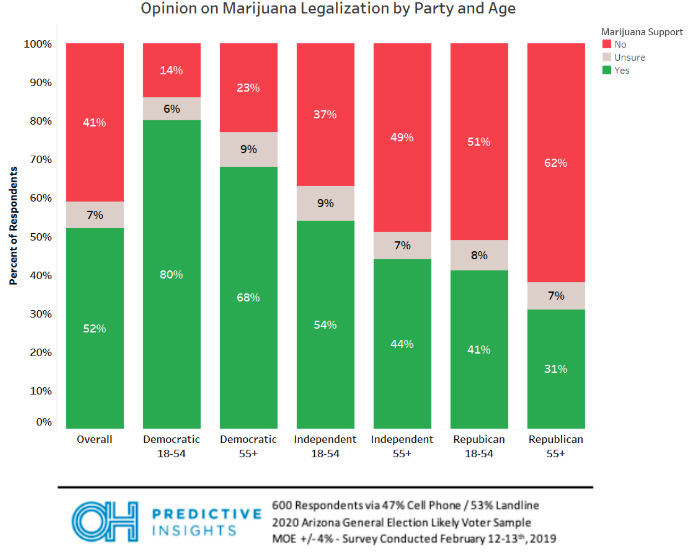 This pattern manifests itself into the Senate race, where Senator McSally leads Democrat Mark Kelly overall 46-44%. Among McSally’s voters, there is opposition to marijuana legalization by a margin of 33-58 (-25%) whereas, Kelly’s voters approve of legalization 73-21 (+52%). Respondents undecided in the race are, however, opposed to legalization 37-54 (-17%), this is due to most of the undecided voters being older and conservative voters.

Overall, it appears that the idea of legalizing marijuana now has a majority of support in Arizona more so because of stronger support emanating from groups that have traditionally supported it such as men, younger age groups, and Democrats.

Methodology: This blended poll was conducted via 47% cell and 53% landline. The survey was completed by OH Predictive Insights on February 12, 2019, and February 13, 2019, from an Arizona likely 2020 General Election voter sample. The sample demographics accurately reflected party affiliation, gender, region, and age. The sample size was 600 completed surveys, with an MoE of ± 4%. Numbers may not total 100%, due to rounding. Poll report for the General Election poll can be viewed here.