Over half aware of DUI citation, primarily through mass media

Phoenix, AZ (June 22, 2017) –  Arizona is never short of hot political issues or debates, and typically a City Council position gets little to no attention – that is until now. There have been ongoing conversations about whether Mesa City Councilman Ryan Winkle, District 3 should resign from office or remain in his position, following his May arrest on suspicion of DUI. We asked the voters of his district their opinions, and if they believe the Councilman of six months should resign or stay.

Nationally recognized polling firm, OH Predictive Insights, conducted a survey comprised of 304 currently registered Democratic, Republican, Independent and Non-Declared voters registered in Mesa’s 3rd City Council District. The survey was conducted from June 8th to June 19th, with 49% of the sample contacted on their cellular phones, and 51% of the voters reached via landlines. 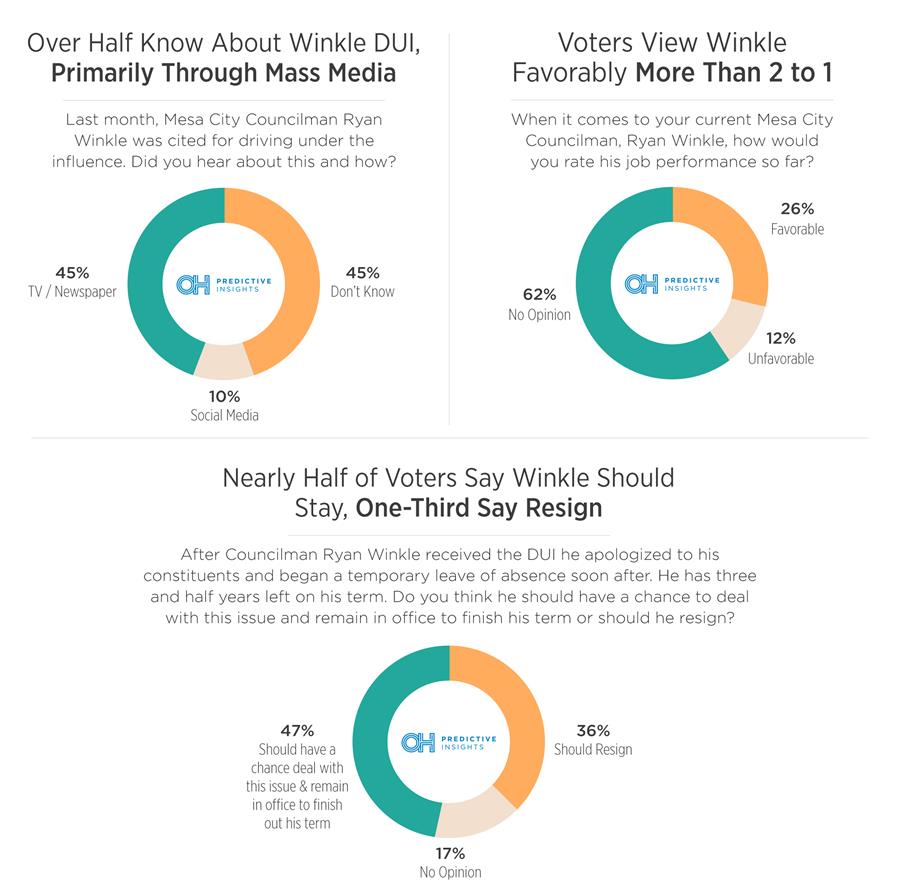 “While over half of Councilman Winkle’s constituents have heard of his recent DUI citation, he still holds a 2 to 1 positive favorability number to remain in his council seat,” said Mike Noble, managing partner and chief pollster at OH Predictive Insights, a Phoenix-based leading behavioral research polling company. “Nearly half of those polled think the Councilman should remain in office, approximately one-third of his constituents believe he should resign, and 17% did not indicate an opinion either way.”

Noble added, “In the eyes of the voter, Winkle is down, but definitely not out.”

Methodology: This live and automated caller survey was conducted by Phoenix based-OH Predictive Insights from June 8th to June 19th, 2017, from an active registered voter sample in Mesa City Council District 3.  The sample size was 304 completed surveys, with a MoE of +/-5.61%.  49% of surveys were conducted on cell phones and 51% via land lines.