3 out of 4 approve of Governor Ducey’s curfew

The OH Predictive Insights survey found nearly three-quarters of Arizona voters approve of Ducey’s handling of the protests and riots.

The Arizona Public Opinion Pulse (AZPOP) is a monthly survey of 600 likely general election voters in the state of Arizona. It has a margin of error of 4.0% and accurately reflects the state, based on party, region, age, gender, ethnicity, and education level.

“Gov. Ducey has the clear backing of Arizonans as protests and unrest continues,” says OHPI Chief of Research Mike Noble. “The governor stepped in and instituted the 8 p.m. to 5 a.m. curfew for the entire state. Voters clearly appreciated the quick action.”

Although most of the protests in response to Floyd’s death have been peaceful, some – like the ones at Scottsdale Fashion Square on May 30th – devolved into outbreaks of rioting and looting. More than 60 percent of Arizonans are moderately or extremely concerned about the demonstrations. 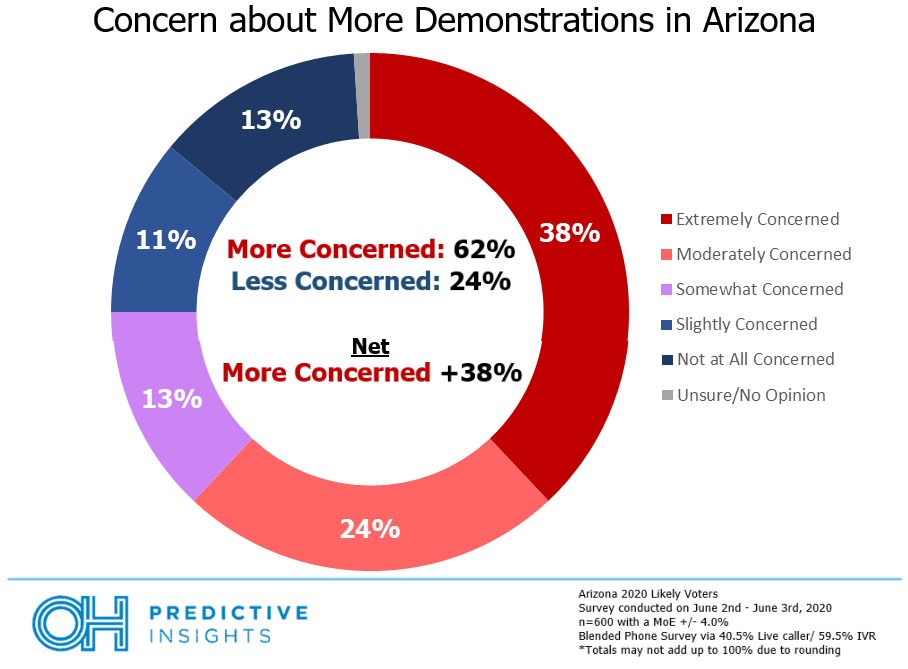 Concern is highest among Republicans (77 percent), voters 55 and older (71 percent), and Hispanics (65 percent). On the other hand, those who are 54 and younger (49 percent) and college-educated Democrats (39 percent) are least likely to report being as concerned about potential protests.

While voters are on edge about the violent outbursts which may come out of peaceful protests, they are confident in Gov. Ducey’s leadership throughout the situation. The curfew, which was announced last Sunday and expired at 5:00 this morning, was viewed positively by nearly three-quarters of Arizona voters. In fact, majorities of voters across all parties, ages, and ethnicities approve of the curfew.

“The curfew’s popularity cuts across political parties and gender,” Noble said, “Rarely has any state policy been as popular as Ducey’s 8 p.m. curfew.”

Support for the curfew did, however, vary depending on how worried a person was about more protests. Those who were less concerned about new demonstrations in Arizona were also less convinced that a curfew was necessary. Approval of Ducey’s curfew was underwater among these voters (42 percent approve, 54 percent disapprove). The curfew was extremely popular among those who were more concerned about protests (83 percent approve, 15 percent disapprove).