Trump favorability underwater by 13 points in the desert

PHOENIX (April 19, 2018) – The GOP has two U.S. Senate seats at risk this election and Arizona’s Senate seat is one of those two. Democrat front-runner, Kyrsten Sinema, has little to no opposition while the GOP currently has a three-way primary between heavy-hitters Dr. Kelli Ward, former Maricopa County Sheriff Joe Arpaio, and Congresswoman Martha McSally.
Arizona’s OH Predictive Insights and ABC15 Arizona (OHPI/ABC15) teamed up to find out who is winning and why.
“The issue we are consistently seeing in the numbers is that Democrats are unified, Republicans are less united, and the all-important Independent voters are trending anti-Republican/Trump” said Mike Noble, managing partner and chief pollster at OH Predictive Insights, a Phoenix-based leading behavioral research polling company. “The factors to look for will be if there are enough voters that do not view Trump favorably that still vote the Republican party and whether or not the winning GOP primary candidate tries to or is able to create a distinct identity.”
While the 2018 General Election is still in the distant horizon we wanted to see where Trump stands with likely voters and evaluate the state of the U.S. Senate race.  We previously tested this back in a November of 2017 survey.
We begin by looking at President Trump’s favorability in Arizona.

One of the most important factors in any mid-term election is the voters’ perception of the president affecting down ballot races.

We conducted a survey of six hundred likely 2018 General Election Democratic, Republican, Independent and Non-Declared voters across Arizona, based on likely 2018 turnout participated in this survey with a +/-4% MOE. 19% via cell and 81% via landline.

It is important to bear in mind that our likely General Election survey sample has a Republican +12-point advantage over Democrats. Despite the 12-point GOP advantage in the poll, the President’s favorability is in the red.

Republicans and Democrats are polarized on this question (which is no surprise given the current political climate) however the all-important Independents view him unfavorably by a staggering 49-point margin. 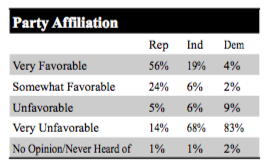 Moving on, before we get into the head-to-head matchups for the Arizona U.S. Senate Primary and General election, let’s see where the main contenders sit regarding name ID and favorability. 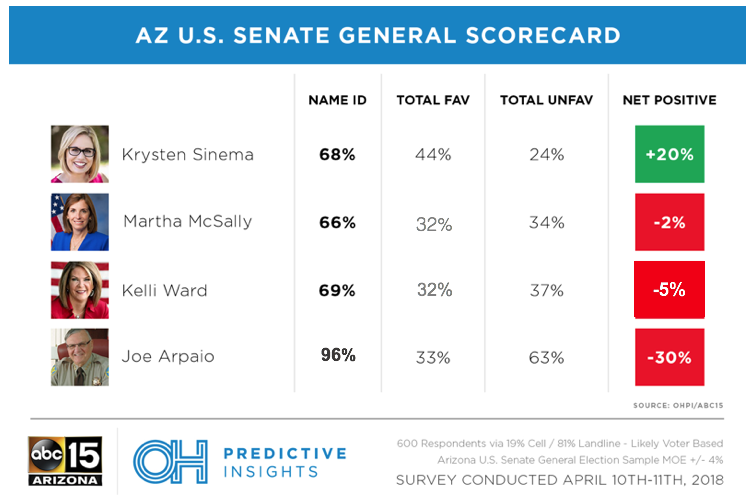 ·    Kelli Ward has 71% name ID in the largest geographic region of Maricopa county, however, 41% view her unfavorably, the only region she is at a negative. Ward excels the most among those that have an education level of Some College, with 72% name ID among that group and 41% viewing her favorably

·    Martha McSally has 92% name ID in Pima county, nearly universal compared to her 66% statewide, but a majority of Pima county voters (51%) have a negative view of her. The only group McSally has an underwater approval rating is with post-grad voters, where 44% see her unfavorably

·    Kyrsten Sinema has 80% name ID in Maricopa county with 53% viewing her favorably and only 27% viewing her unfavorably. Sinema is underwater with High School or Less with 31% favorable and 33% unfavorable opinion

·    Former Maricopa County Sheriff Joe Arpaio was elected 6-times in Maricopa county, however, in our latest poll he holds double the amount in unfavorable (68%) compared to favorable (29%) opinion among those voters. Arpaio does exceptionally well with those that have an education level for High School or Less, with 58% viewing him favorably compared to only 38% unfavorably

Now, we will pivot to the state of the Arizona Senate GOP primary. If the election were held today, who would likely Republican primary voters vote for? Don’t worry, we have the answer. 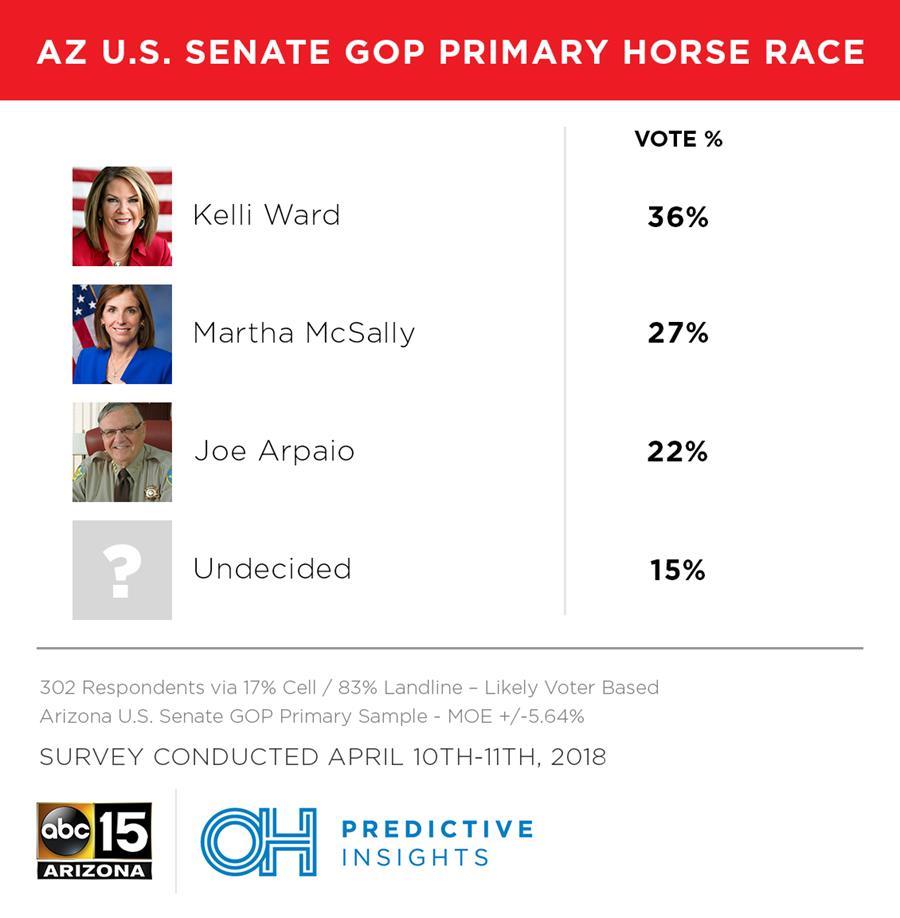 Currently, Ward has an advantage of 9-points over McSally where Ward’s approval comes from Donald Trump backers. Among those that said they had a very favorable opinion of President Trump, which was 49% of the total sample, Ward took 39% of those voters. Joe Arpaio received 30% of that vote while McSally only acquired 25%.

And last, but not least – the U.S. Senate General Election matchups. 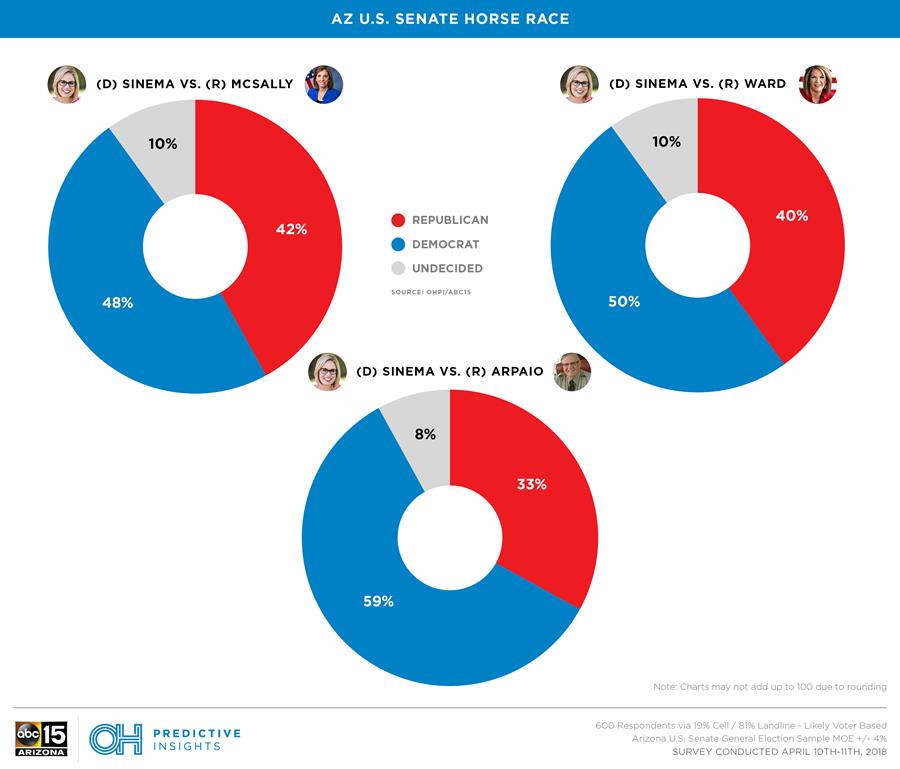 Republicans hold a +12 Republican likely voter advantage in the 2018 General Election, and that’s how we conducted this poll, with a +12 Republican advantage.  But in all three matchups the Democrat is winning. McSally has the best chance being 6-points behind Sinema with Ward close by trailing by 10-points and Arpaio has the worst chances by a staggering 26-point deficit.

So, why is a Democrat leading when Republicans hold a 12-point advantage? The answer is Independents. 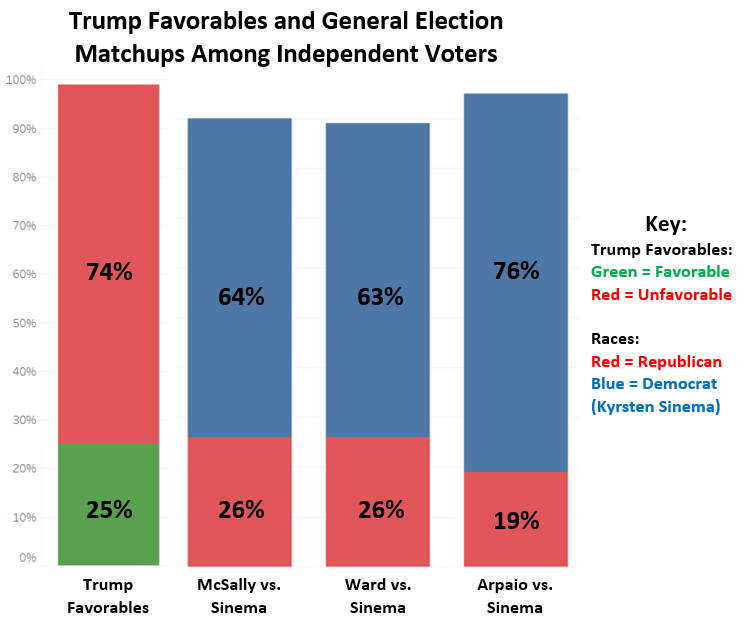 These numbers seem to show that the overwhelming factor is the opinion of Donald Trump, with the exception being that about a quarter of the Republican vote would defect if Joe Arpaio were to become the GOP nominee.

Summary: The midterms continue to creep closer and unless Donald Trump can turn his approval numbers around, it may prove to be a problem for any Republican candidate who needs that support to win the primary as they pivot to the general election. As candidate’s scrap over who best takes that mantle in the primary, Kelli Ward is currently able to maximize that over any challenger, and concerns about winning the general may be bringing down Joe Arpaio’s vote. 55% of the likely GOP primary sample had a very or somewhat favorable opinion of Arpaio, but he is only capturing 22% of the GOP primary vote which raises some eyebrows.

In the general, Kyrsten Sinema has a definite lead by putting up huge leads with Independents, winning an outright majority of women, and is peeling off more Republican voters than she is losing in Democrat cross-over votes.

“Right now, there is no room in Arizona for any personality bigger than Trump in this Senate race,” said Noah Rudnick, Data Analyst for OH Predictive Insights, “He dominates the preferred choice in the primary, then his detractors become the de facto Sinema voters in the general, and anywhere he struggles, Republicans are going to struggle.”

Methodology: This telephone survey was completed by OH Predictive Insights on April 10th thru 11th, 2018, from a likely 2018 General Election voter sample. The sample demographics accurately reflected party affiliation, geographic location, gender, and age. 19% of respondents were completed via cell phone and 81% via landline. The sample size was 600 completed surveys, with a MoE of ±4%.