Over half of voters are unaffected after six of Rep. Paul Gosar’s siblings are featured in opposing campaign ad

PHOENIX (Sept. 27, 2018) – Rep. Paul Gosar has been in the public eye lately, after six of his nine siblings were featured in a campaign ad by Gosar’s opponent, Dr. David Brill. Phoenix-based research and polling company, OH Predictive Insights, turned to Arizona’s fourth congressional district to gauge the effect among likely voters.

Among voters, Gosar is a popular choice: 57% of voters said they would vote for Gosar, with Brill at 25%, Haryaksha Gregor Knauer at 2% and 16% undecided.

In reference to the ad opposing Gosar, voters were also asked: “Does this make you more or less likely to vote for Congressman Paul Gosar, or does it make no difference in your vote?” Among responses, 25% said the ad made them more likely to vote for Gosar, 17% said it made them less likely and 58% said it made no difference. More than half of respondents are unfazed, in spite of the opposing ad making national news. 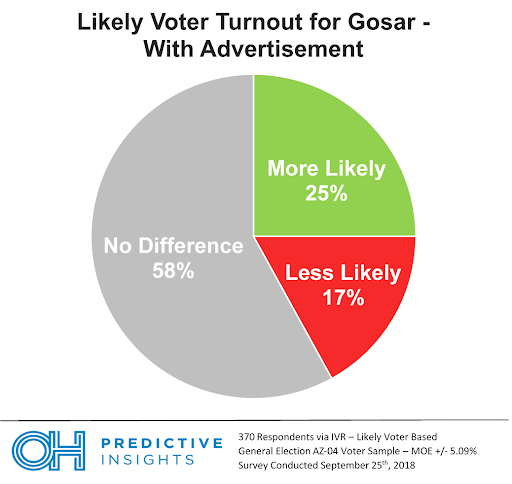 “You can’t blame a guy down 32 points from the frontrunner for trying a more unconventional campaign strategy,” says Mike Noble, managing partner and chief pollster of OHPI. “It was a great headline, however it lives in a bubble compared to the actual impact on the race and voting electorate.”

Among those who said they were in support of Gosar, many are sticking to their vote after the ad. It seems that the ad had a reverse impact on Gosar’s supporters: only 5% are less likely to vote for him as a result of the ad, 32% are more likely and 63% are not affected. ​ 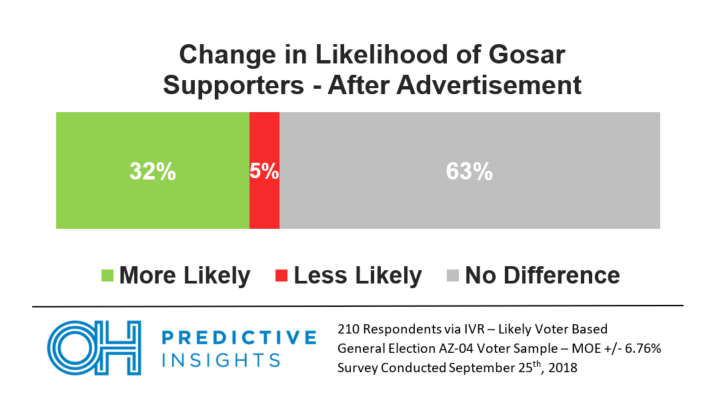 Males voting for Gosar have an even higher percentage: only 3% are less likely to vote for him because of the ad, 40% are more likely and 57% do not have a change of opinion.

Now, the elephant in the room: What’s going to happen at the next Gosar family reunion? OHPI asked Arizonans how they would prefer to watch the next Gosar meetup: 15% would want to attend in person, 12% would watch it on TV, 2% would be willing to watch it on Pay Per View and 66% have no interest in watching at all.

“As awkward as the next reunion will be, surprisingly most voters don’t have any interest in being a fly on the wall,” said Noble.

Methodology: This automated phone poll was completed by OH Predictive Insights on September 25, 2018, from a likely 2018 General Election AZ-04 voter sample. The sample demographics accurately reflected party affiliation, gender, region, and age. The sample size was 370 completed surveys, with a MoE of ± 5.09%. Poll report for the General Election poll can be viewed here.