POLL: Arizonans’ Concern Over COVID Lessens  Even as Cases Rise

Arizonans’ Concern Over COVID Lessens  Even as Cases Rise

Majority approve of Ducey’s handling of the outbreak

PHOENIX(June 10th, 2020)- As the coronavirus cases spike in Arizona and hospital beds are quickly taken up by COVID-19 patients, concern among voters in the state has dropped since April.

According to the most recent AZPOP, even with the rise in COVID-19 cases, nearly 60 percent of voters remain concerned over the outbreak in Arizona.

“As voters have learned about the coronavirus and learned to cope with the potential dangers, they are less concerned than at the start of the outbreak,” said OHPI Chief of Research Mike Noble, “As the initial scare subsides, voters are growing accustomed to a new normal.”

The number of voters statewide who are most concerned about the Coronavirus dropped two points over the course of the last month – falling from 61 percent to 59 percent. This decrease is driven by a 2- and 10-point drop among Republicans and Independents, respectively.

However, there remains a sharp divide in opinion between voters of different political parties. Democrats remain very concerned about the pandemic. In fact, while other parties have relaxed since May, the share of Democrats who reported being extremely or moderately concerned increased 3 percent over the same period of time. 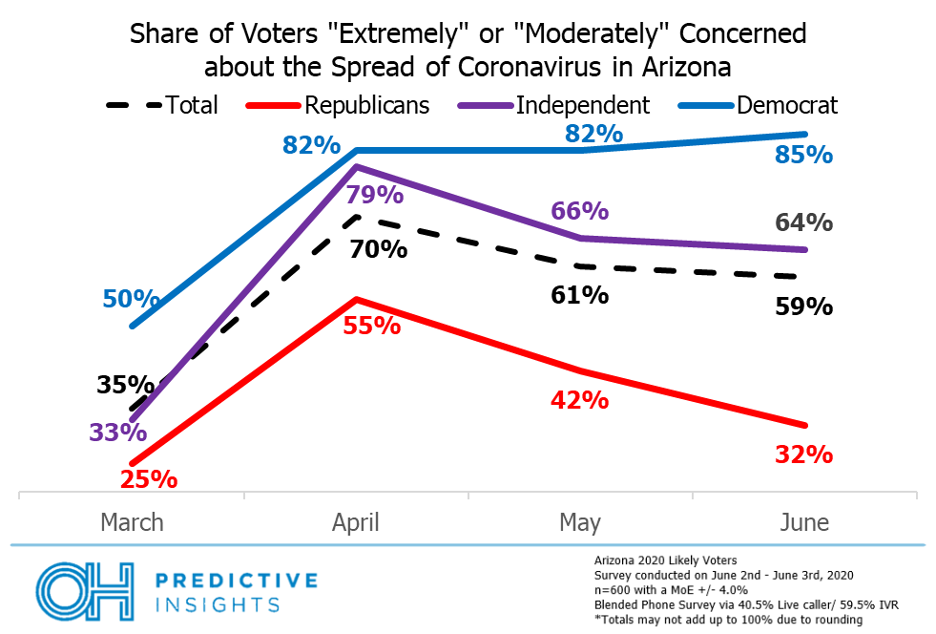 While the concern is easing across the state, voters in the state are turning their attention to the economy. More than three weeks after the end of Arizona’s stay-at-home order, almost half of voters are still concerned about relaxing the restrictions too soon and risking more infections while more than one-third are more concerned about the economic fallout of taking too long to reopen. 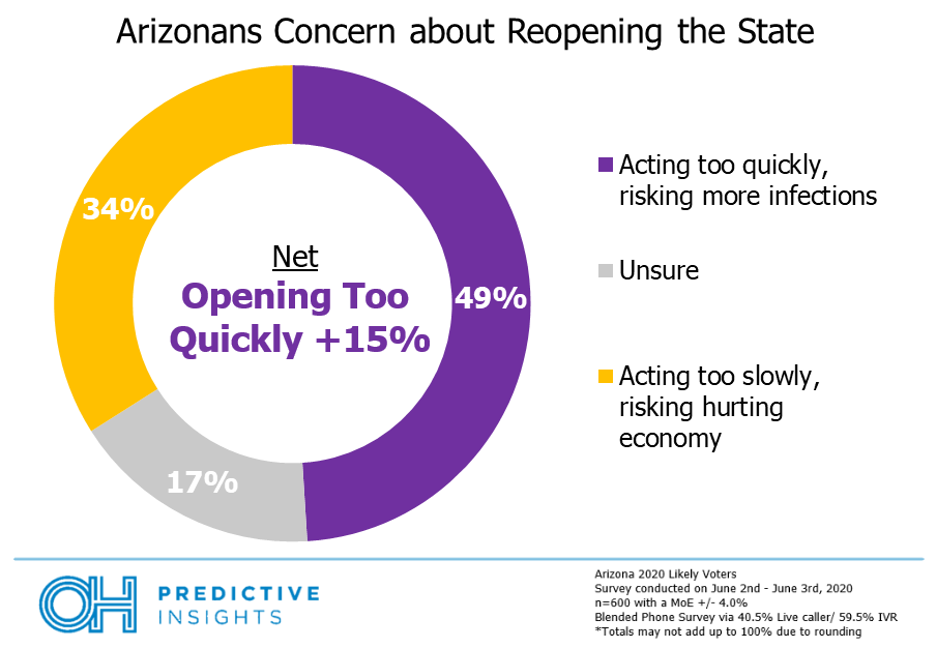 Furthermore, while a majority (53 percent) of women are more concerned about increasing the spread of the Coronavirus, the same cannot be said for men. Just 45 percent of men are also more concerned about reopening too quickly than acting too slowly. The other 55 percent of men are either worried about taking too long to reopen the economy or are unsure.

Despite the spike in COVID-19 cases the state has seen and concern among voters that Arizona may be opening too quickly, Arizonans are still largely satisfied with Governor Doug Ducey’s handling of the outbreak. Nearly three-fifths of likely voters either strongly or somewhat approve of the job Ducey has been doing, while 37 percent disapprove.

There is virtually no difference between his approval in this poll and when the question was last asked in April. In the April AZPOP, 59 percent of Arizona voters approved of his actions regarding the Coronavirus, while 36 percent disapproved.