PHOENIX (Oct 22nd, 2019) – When Barrett Strong famously sang, “Money that’s what I want,” the 60s R&B crooner could easily have been foreshadowing the 2020 race for the U.S. Senate seat in Arizona.

The presumed matchup of Sen. Martha McSally and former astronaut Mark Kelly is on pace to set financial records – and the calendar hasn’t even turned 2020 yet.

“Typically, the incumbent enjoys the advantage in the race for cash although Arizona’s Senate race is not like any other race in the country,” said Mike Noble, managing partner and chief of research at OH Predictive Insights, a Phoenix-based leading behavioral research polling company. “Both posted strong numbers this quarter although new-comer Kelly is currently performing better than incumbent McSally on many of the key money indicators.”

Campaign finance reports are cumbersome so OHPI has created an interactive dashboard to track the money race in Arizona as campaign season heats-up.

Kelly, husband of former-Rep. Gabrielle Giffords, sits on a war chest of nearly $10 million — almost double Sen. McSally’s total cash on hand of $5.7 million. Kelly also shows significant grassroots support with more than 50% of his $14 million raised coming from contributions in quantities less than $200 and only 3% coming from political action committees (PACs). McSally’s trails Kelly’s small-dollar receipts, raising about 44 percent of her $8.5 million from coveted small-dollar donors. PACs, however, account for about 20 percent of her donations. 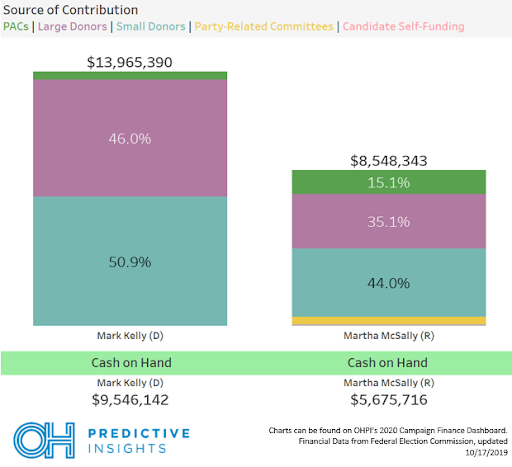 As a sign of how much national interest Arizona’s Senate race is receiving more than a year from Election Day, the vast majority of both candidate’s large ($200+) individual donations are coming from outside of the state. For every $1 donated to Mark Kelly’s campaign from an Arizonan, he gets $3 from a non-Arizonan. A slightly higher proportion of McSally’s big donors are in-state but still nearly two-thirds come from elsewhere in the country. 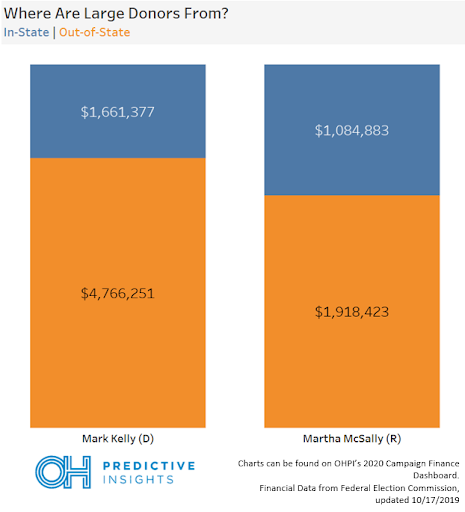 While Kelly is bringing in more cash, McSally’s purse strings are looser. McSally has spent almost 45 percent ($3.8 million) of the money she has raised. Compare this to Kelly who has spent more than McSally ($4.4 million) but this accounts for a considerably smaller proportion of the money he has raised — 31 percent.

Taking a look at the campaigns for Arizona’s 9 congressional seats, almost all of the incumbents have massive leads in both money raised and cash on hand over their challengers. In Arizona’s 1st District — a perennial Republican target — Rep. Tom O’Halleran has more than six times as much cash on hand as the nearest Republican, Tiffany Shedd. In Arizona’s 2nd District, which Democrats flipped in 2018, incumbent Ann Kirkpatrick has raised more than 10 times as much money as every Republican in the race combined.

The only Arizona House race remotely interesting in the cycle is David Schweikert’s suburban 6th District. As of the end of the 3rd quarter, Schweikert has $140,000 in the bank with $180,000 in debt but his Democratic challenger, Hiral Tipirneni, has more than $600,000 — a total which puts her second among all Arizona House candidates and first by a very wide margin among non-incumbents. 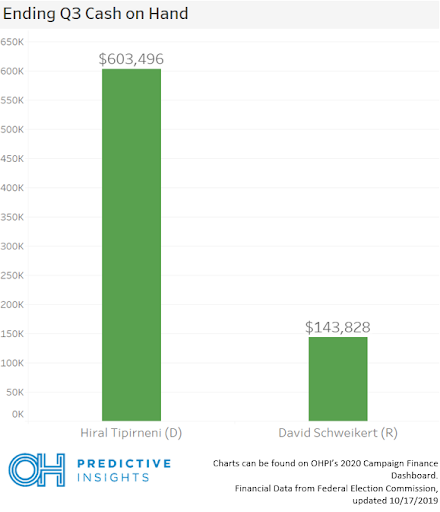