Analysis: What Happened In Maricopa?

What Happened In Maricopa?

PHOENIX (December 20, 2018) – Maricopa County is the largest fixture of Arizona, accounting for roughly 60% of Arizona voters in every statewide election.  A recent trend in Maricopa favors the Democrats, as Trump only won 47.7% here in 2016 compared to 54.3% for Romney just four years earlier.

In 2018, Maricopa was home to a large amount of ticket splitting that delivered Democrat Kyrsten Sinema the victory for U.S. Senate. Republican candidate Martha McSally would go on to win 46.8% in Maricopa while Governor Doug Ducey won 55.8% of the countywide vote, a 9% swing. Below are the main takeaways directly related to ticket splitters and the key to understanding what happened in the Senate race.

“Now that the dust has settled from the most expensive race in Arizona’s history, the data gives way to what exactly happened in the Arizona Senate race,” said Mike Noble, chief of research and managing partner of OH Predictive Insights, a Phoenix-based strategic and public opinion research company.

The chart below looks at ticket splitters between the Governor and Senate race in Maricopa. The x-axis shows the relationship in ticket splitting in 2016, the left side is where Senator John McCain did better relative to where Trump did better and the y-axis plots show where Ducey performed better than McSally in 2018. The black curve is the overall trend in the data points while the red line displays the 9% countywide performance of Ducey over McSally. 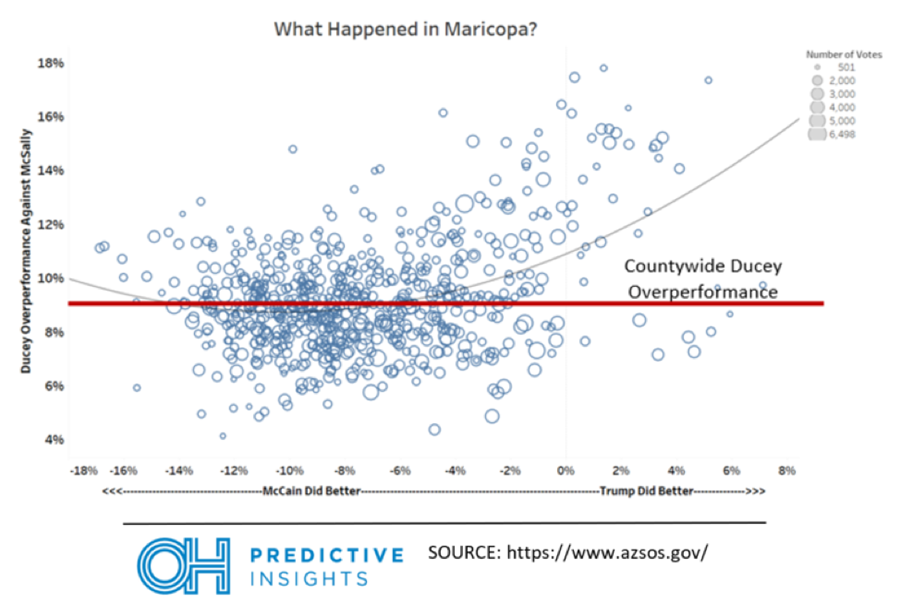 1. McCain Voters That Knew Sinema Voted for Her

First, we look for any deviations from the red straight line on that chart which signifies the 9% overperformance on the y-axis, beyond that the suburbs flipped to the Democrats that has been documented extensively elsewhere.

The first detail that stands out is to the very left of the chart where the light grey curve bends upward. This cluster is where McCain did a lot better than Trump and Sinema performed better with voters that also choose Doug Ducey for governor. Anti-Trump voters are the marginal and digging a bit deeper we see most of the tail were in Arizona’s 9th district, which Sinema represented before making her run for Senate. Every precinct within the 9th is highlighted in yellow below, and you can see McCain did better than Trump there but also that they make up the most extreme outliers. 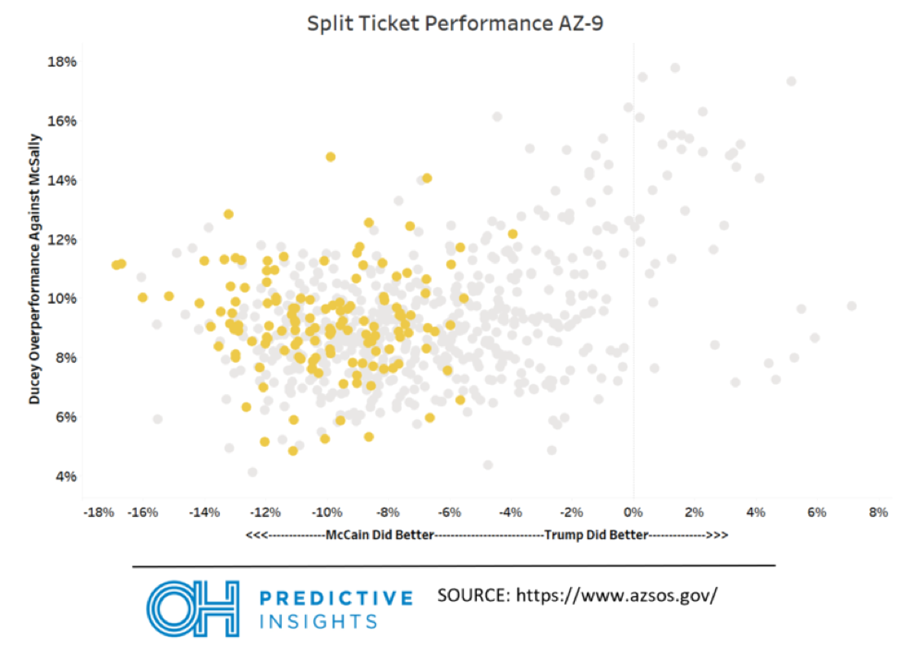 2. Aggressive Campaigning on the Age Tax Pays Off

Throughout the campaign, Sinema consistently hit Republican Martha McSally on voting for an, “Age Tax,” related to the healthcare bill which clearly became an effective attack on the other group of voters that stands out. There is a cluster on the right side of the chart below which shows where Trump did better or even to McCain, a shift compared to the county as a whole. This group also saw the highest Ducey overperformance, where people were willing to vote Republican but not in the Senate race.

When broken down by congressional district, it turns out that this cluster is exclusively in the 5th and 8th districts, as in the same chart shown below, but now with those districts highlighted. CD5 and CD8 are both deep Republican districts currently represented by Republican Freedom Caucus members, which are further to the right than most other Republican representatives. 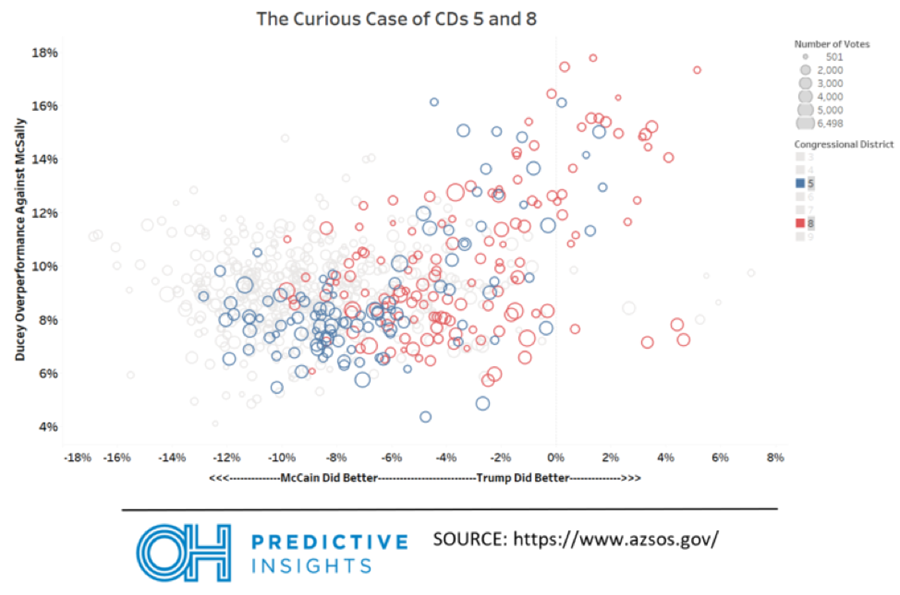 Looking at the precincts themselves, the group in the upper right hand corner of places that voted for Trump in equal or greater numbers than they voted for McCain in 2016 while also backing Ducey and Sinema this time with high turnout, came from two tight clusters of geographic communities: In the 8th, it’s Sun City and in the 5th, it’s the area surrounding and including Leisure World. People from Arizona will immediately spot the similarity in these outliers in that they are heavily populated with retirees. What we can conclude is that the more elderly areas were spooked by the “Age Tax”  rhetoric consequently crossed over parties and voted Democrat Sinema for Senator.

“Clearly Sinema was able to win them over with the healthcare issue, and looking forward to 2020, this is the decisive electorate in the battle for President and another Senate seat.” Said Noah Rudnick, data analyst with OH Predictive Insights.