“Correctly predicting a special congressional election is near impossible in this climate. But OHPI did just that, correctly predicting a Debbie Lesko win but with a smaller margin than many others predicted. As one of the leading pollsters in Arizona, OHPI prides itself on accurately reflecting the mood of voters in the Grand Canyon State” said Mike Noble, managing partner and chief pollster at OH Predictive Insights, a Phoenix-based leading behavioral research polling company.

The April 24 election, to replace U.S. Rep. Trent Franks who resigned following a scandal, featured Lesko and Democratic candidate Hiral Tipirneni. With this the only election in the nation happening in the western Phoenix region, national media descended upon Arizona to report on the race.

OH Predictive Insights conducted a poll on April 11 and found Lesko leading 53-43. The poll found Lesko was under water with independent voters. Lesko won with 52.6 percent to Tipirneni’s 47.4 percent.

Below shows the AZ-08 breakdown of Independent voters, who broke 52-40 toward Tipirneni. 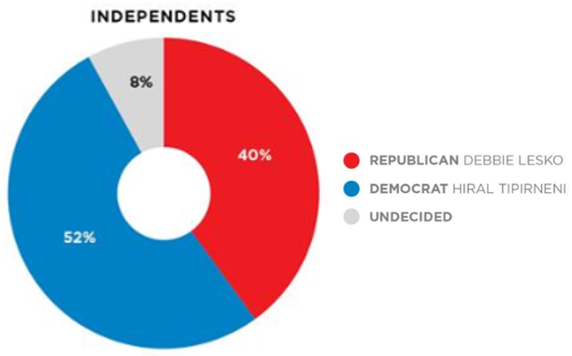 In our statewide Arizona poll, we found that President Trump’s positive favorability statewide among Independents stood at just 25%. In 2016, with a large drop of 18 points, we would expect the Independent margin to change at the same rate, increasing his favorables to roughly 35%, which is line with our polling. Overall, the struggle to reach out beyond the hardcore base continues to plague the Republicans in the once ruby red Arizona.